Chipotle Cultivates A Better World With First-Ever Float In The 130th Rose Parade
Made with Real Ingredients and Featuring a Performance by Grammy Winners Portugal. The Man

NEWPORT BEACH, Calif., Dec. 17, 2018 /PRNewswire/ -- Chipotle Mexican Grill (NYSE: CMG) is bringing its mission to cultivate a better world to life through a Rose Parade float made with its real ingredients on New Year's Day. The float, featuring a giant red tractor symbolizing the work of local farms, will be ridden by growers and suppliers of ingredients for Chipotle restaurants. Joining the farmers will be the Grammy winning rock band, Portugal. The Man, performing hits like "Feel It Still" and "Live In The Moment." 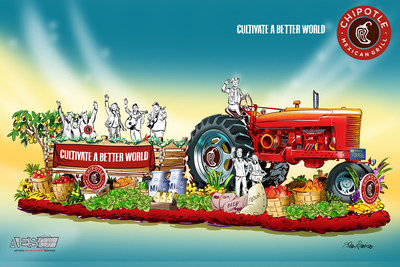 The 'Cultivate a Better World' float is Chipotle's first-ever entrant in the Rose Parade, and will be built using the real ingredients served in Chipotle restaurants including approximately 200 pounds of chili flakes to cover the tractor; ground onion seeds for the tires; cumin, cloves, oregano and bay leaves covering the cart; ground white rice for lettering and 100 pounds of lemons hanging in the trees. Other ingredients on display for the 5.5-mile route include corn, onions, rice, garlic, thyme, chipotle chilies, poblanos, jalapenos, bell peppers, tomatoes, tomatillos, red onions, yellow onions, avocados, cilantro, limes and romaine lettuce. The ingredients used to build the float will be composted and donated to local farms in the area.

"Both our farming partners and our employees make it possible for Chipotle to serve millions of customers daily with real food made from real ingredients," said Chris Brandt, chief marketing officer at Chipotle. "We want to celebrate those who work hard every day to help us cultivate a better world, and the iconic Rose Parade is a great way to showcase Chipotle's commitment to great tasting food that you can feel good about eating."

The theme of this year's Rose Parade is "The Melody of Life," so Chipotle turned to Portugal. The Man to help bring the theme to life for spectators and home viewers. A friend of Chipotle, Portugal. The Man previously headlined two of Chipotle's Cultivate festivals and contributed a song to Chipotle's Rad Lands children's video, which educated viewers on ingredients, food choices and food origins.

"We have a lot of admiration for Chipotle because they prove that you can make a good, tasty burrito and the world a better place, all in a day's work," said Portugal. The Man.

The Rose Parade begins at 8:00 AM PST on January 1, 2019, in Pasadena, California. For millions of people around the world, the Rose Parade is an iconic New Year's Day tradition. The Rose Parade features four types of entries: floral-decorated floats entered by a participating corporation, non-profit organization or municipality, equestrian units, bands, and Tournament Entries.

Chipotle Mexican Grill, Inc. (NYSE: CMG) is cultivating a better world by serving responsibly sourced, classically-cooked, real food with wholesome ingredients without added colors, flavors or other additives. Chipotle had more than 2,450 restaurants as of September 30, 2018 in the United States, Canada, the United Kingdom, France and Germany and is the only restaurant company of its size that owns and operates all its restaurants. With more than 70,000 employees passionate about providing a great guest experience, Chipotle is a longtime leader and innovator in the food industry. Chipotle is committed to making its food more accessible to everyone while continuing to be a brand with a demonstrated purpose as it leads the way in digital, technology and sustainable business practices. Steve Ells, founder and executive chairman, first opened Chipotle starting with a single restaurant in Denver, Colorado in 1993. For more information or to place an order online, visit WWW.CHIPOTLE.COM.