NEWPORT BEACH, Calif., Dec. 4, 2019 /PRNewswire/ -- Chipotle Mexican Grill (NYSE: CMG) today announced its financial commitment to help drive the future of farming for younger generations. With the average age of farmers at about 58* and more than half of U.S. farms losing money last year, Chipotle recognizes that the future of real food depends on cultivating the next generation of farmers. The brand is implementing a scalable solution via three-year contracts, seed grants and increased local purchasing, which will significantly impact the lives of young farmers and their communities so they can make a living during a period of steep agriculture downturn. 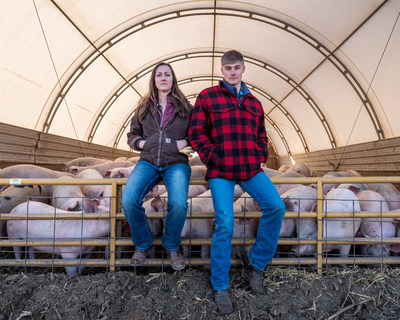 Over the last five years, U.S. agriculture lost over 40 times more farmers than it gained**, challenging the future of small and midsized farms throughout the country. According to the U.S. Department of Agriculture, farm debt is projected to hit a record $416 billion this year, up almost 40% since 2012. Fewer farms means less real food and trouble for the communities that depend on them. To help drive change, Chipotle will deploy various tools to help reinvigorate the industry and help bridge one of the largest economic challenges.

Chipotle will commit to helping the next generation of farmers by paving a path to profitability through Three-Year Contracts to buy product from farmers under the age of 40 who meet its Food with Integrity standards starting with beef, pork and dairy. Chipotle will support young farmers through various approved livestock and dairy networks, including Niman Ranch, and its own Local Growers Initiative, which increases the chances of profitability despite market fluctuations. Further, Chipotle is also committing to increase its local sourcing across the country in 2020, serving more local ingredients in every Chipotle restaurant than ever before. According to its Sustainability Report, 29 million pounds of all produce purchased last year was grown locally.

Additionally, in partnership with the National Young Farmers Coalition and the Chipotle Cultivate Foundation, Chipotle will raise money through consumer actions to fund Seed Grants to establish and assist young farmers. It begins with Farmer Friday on December 6, 2019, where $1 from every entrée purchased on chipotle.com or the Chipotle app will go towards Seed Grants, up to $250,000.

As a follow-up on New Year's Day, Chipotle will have a "Cultivate the Future of Farming" float in the Rose Parade and will donate $1, up to $250,000, to the National Young Farmers Coalition for every post on Facebook, Instagram and Twitter using #farmers on January 1, 2020. Young farmers will ride the float, highlighting real ingredients and celebrating the next generation of local growers.

"Farmers committed to farming in a sustainable and ethical way need help to have a chance to succeed – both for the sake of the future of real nutritious food and the communities that rely on those farms," said Brian Niccol, Chief Executive Officer of Chipotle.

"We are able to keep raising pigs because we have these great customers and supporters, like Chipotle, that care about where their food comes from and are buying product that's raised sustainably, and ethically, and as a result, are supporting families just like mine," said Elle Gadient, Farmer Advocate for Niman Ranch.

ABOUT CHIPOTLE
Chipotle Mexican Grill, Inc. (NYSE: CMG) is cultivating a better world by serving responsibly sourced, classically-cooked, real food with wholesome ingredients without artificial colors, flavors or preservatives. Chipotle had over 2,500 restaurants as of September 30, 2019, in the United States, Canada, the United Kingdom, France and Germany and is the only restaurant company of its size that owns and operates all its restaurants. With more than 80,000 employees passionate about providing a great guest experience, Chipotle is a longtime leader and innovator in the food industry. Chipotle is committed to making its food more accessible to everyone while continuing to be a brand with a demonstrated purpose as it leads the way in digital, technology and sustainable business practices. Steve Ells, founder and Executive Chairman, first opened Chipotle with a single restaurant in Denver, Colorado in 1993. For more information or to place an order online, visit WWW.CHIPOTLE.COM.