NEWPORT BEACH, Calif., June 22, 2020 /PRNewswire/ -- Chipotle Mexican Grill (NYSE: CMG) today announced the second edition of the 2020 Chipotle Challenger Series (CCS) that will allow fans to face-off against celebrities, athletes, musicians and more in Call of Duty: Warzone for a chance to win $25,000 and a year of free Chipotle. The competition is open to all gamers 17 years or older and will feature a duos format. Teams can register and find terms of entry and participation by visiting: www.chipotlechallengerseries.com. 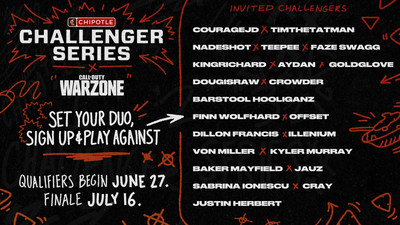 Qualifying competitions, which are open to all amateur gamers, will take place on June 27 and 28 and July 11 and 12. The 2020 Chipotle Challenger Series II Finale, featuring 20 invited teams and 20 qualifying teams, will be hosted on Thursday, July 16 at 12pm PT/3pm ET on Chipotle's Twitch channel (twitch.com/chipotle). Shoutcaster legends Chris Puckett and Maven will give away a total of 5,000 free burritos to viewers throughout the finale stream. For ongoing updates on the competition, fans can follow Chipotle on Twitch, Twitter and Instagram.

The first edition of the 2020 Chipotle Challenger Series began with qualifying competitions in April and a live-broadcasted finale on April 30. Despite the competition featuring a bevy of esports talent, a surprising quartet of gamers Almxnd, Scummin, Intechs, and Insite took home the title. The team has been invited back for the 2020 Chipotle Challenger Series II to defend their title.

In addition to taking home a $25,000 prize and free Chipotle for a year, Chipotle will match the prize pool with a $25,000 donation to the National Urban League, an organization with a deep history and proven track record for supporting Black communities. Chipotle digital customers can support the National Urban League by rounding up their bill to the next highest dollar amount at checkout on the Chipotle app and Chipotle.com.

ABOUT CHIPOTLE
Chipotle Mexican Grill, Inc. (NYSE: CMG) is cultivating a better world by serving responsibly sourced, classically-cooked, real food with wholesome ingredients without artificial colors, flavors or preservatives. Chipotle had over 2,600 restaurants as of March 31, 2020, in the United States, Canada, the United Kingdom, France and Germany and is the only restaurant company of its size that owns and operates all its restaurants. With more than 85,000 employees passionate about providing a great guest experience, Chipotle is a longtime leader and innovator in the food industry. Chipotle is committed to making its food more accessible to everyone while continuing to be a brand with a demonstrated purpose as it leads the way in digital, technology and sustainable business practices. Steve Ells, founder and former executive chairman, first opened Chipotle with a single restaurant in Denver, Colorado in 1993. For more information or to place an order online, visit WWW.CHIPOTLE.COM.