NEWPORT BEACH, Calif., June 22, 2021 /PRNewswire/ -- Chipotle Mexican Grill (NYSE: CMG) today announced it is celebrating the launch of Rewards Exchange, the biggest update to the Chipotle Rewards program since its debut in 2019, by introducing a new video game called Chipotle Race to Rewards Exchange on June 23. The interactive racing game, inspired by the recent resurgence of low-fi video game titles, will challenge players to earn game points and avoid obstacles for a chance to win a 2021 Tesla Model 3 and other prizes. 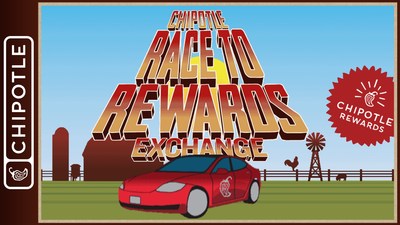 Ready, Set, Rewards
The Chipotle Race to Rewards Exchange video game will last 48 hours, officially going live on June 23 at 9:00am PT and ending on June 25 at 9:00am PT. Fans can compete by visiting: racetorewards.com. The game will be available on mobile and desktop devices.

Real Grand Prizes
The top eligible scorer at the conclusion of Chipotle Race to Rewards Exchange will take home a standard 2021 Tesla Model 3. Chipotle will award the second, third, and fourth place eligible finishers with an electric bike, and eligible players ranking five through 10 on the leaderboard will win an electric skateboard.

With the new Rewards Exchange, a member can earn enough points for free chips after just two visits to Chipotle. In an ode to faster rewards, up to the first 500,000 players who pass two Chipotle restaurants in the game each day will receive 250 points in their Rewards account, which is the number of points that are required to redeem an order of chips at Chipotle. Chipotle will give away a total of up to 1 million free orders of chips in Chipotle Race to Rewards Exchange via points in players' Rewards accounts.

"The new Chipotle Race to Rewards Exchange video game is a fun way to demonstrate the speed at which our loyalty members can now earn rewards," said Chris Brandt, Chief Marketing Officer. "This is one of the many ways we're super-charging our superfans and offering exclusive experiences to our most loyal guests."

NO PURCHASE NECESSARY. Open to legal residents of the U.S. & D.C. (except AK & HI), 13 years of age or older, with free Chipotle Rewards account. Minors must have parental consent.  Contest Period: 6/23/21 at 9:01 am PT – 6/25/21 at 8:59 am PT.  See the Official Rules for additional eligibility restrictions, how to enter, prize descriptions/restrictions, and complete details. Sponsor: CMG Strategy Co., LLC.  Official Rules

ABOUT CHIPOTLE
Chipotle Mexican Grill, Inc. (NYSE: CMG) is cultivating a better world by serving responsibly sourced, classically-cooked, real food with wholesome ingredients without artificial colors, flavors or preservatives. Chipotle had over 2,800 restaurants as of March 31, 2021, in the United States, Canada, the United Kingdom, France and Germany and is the only restaurant company of its size that owns and operates all its restaurants. Chipotle is ranked on the Fortune 500 and is recognized on the 2021 lists for Forbes' America's Best Employers and Fortune's Most Admired Companies. With over 97,000 employees passionate about providing a great guest experience, Chipotle is a longtime leader and innovator in the food industry. Founded in 1993, Chipotle is committed to making its food more accessible to everyone while continuing to be a brand with a demonstrated purpose as it leads the way in digital, technology and sustainable business practices. For more information or to place an order online, visit WWW.CHIPOTLE.COM. 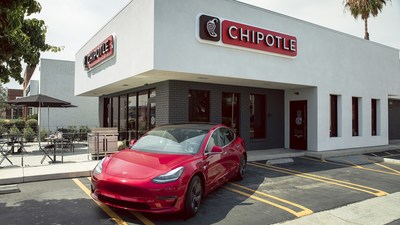