NEWPORT BEACH, Calif., Dec. 14, 2022 /PRNewswire/ -- Chipotle Mexican Grill (NYSE: CMG) today announced it is teaming up with The Farmlink Project to help donate more than 10 million pounds of produce to food banks this winter, with a goal of reaching 20 million pounds donated. 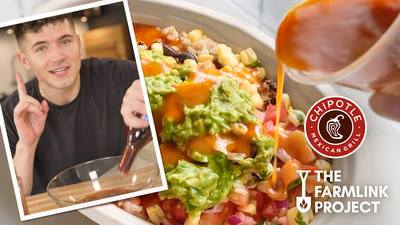 "Chipotle is a clear restaurant leader in local sourcing, buying over 35 million pounds of local produce in the last year alone," said Chris Brandt, Chief Marketing Officer, Chipotle. "We are proud to partner with The Farmlink Project to help them deliver fresh produce to food banks and help feed those in need this winter."

Chipotle believes that real food made with real ingredients has the power to change the world. For the third consecutive year, the brand is partnering with like-minded nonprofit, The Farmlink Project, to help The Farmlink Project donate fresh produce to food banks. Founded by college students during the pandemic, The Farmlink Project is a grassroots movement that connects farms with food banks to fight food waste and hunger while supporting essential jobs.

The Farmlink Project's Lead Ambassador and social media chef Nick DiGiovanni partnered with Chipotle to help generate awareness for the goal of 20 million pounds of produce donated this winter. If Chipotle and The Farmlink Project reach that goal by January 31, Chipotle will reveal the cult-favorite Chipotle Honey Vinaigrette recipe featuring nine real ingredients for the first time ever. Fans on social have long obsessed over how the Chipotle Honey Vinaigrette tastes so delicious (see examples HERE, HERE, HERE).

Chipotle fans can support The Farmlink Project by:

More than 33 million Americans live with food insecurity.** Defined by a lack of consistent, reliable access to enough food for an active, healthy life, food insecurity is a critical issue nationwide.** Chipotle and The Farmlink Project have partnered to help put food on the table this winter, especially in communities that need it most. Chipotle is working with The Farmlink Project to route donations to the top 20 most food insecure markets in the U.S., including Albuquerque, N.M., Indianapolis, New Orleans, Augusta, Ga. and more.***

*No purchase necessary. For every $1 donation to The Farmlink Project with 485 loyalty points in the Rewards Exchange section of the Chipotle app and on Chipotle.com between December 14, 2022 through January 31, 2023 in the US, Chipotle will donate 1 additional dollar, with a minimum Chipotle matching donation of $10,000 and maximum of $50,000.

Chipotle Mexican Grill, Inc. (NYSE: CMG) is cultivating a better world by serving responsibly sourced, classically-cooked, real food with wholesome ingredients without artificial colors, flavors or preservatives. Chipotle had nearly 3,100 restaurants as of September 30, 2022, in the United States, Canada, the United Kingdom, France and Germany and is the only restaurant company of its size that owns and operates all its restaurants. Chipotle is ranked on the Fortune 500 and is recognized on the 2022 list for Fortune's Most Admired Companies. With over 100,000 employees passionate about providing a great guest experience, Chipotle is a longtime leader and innovator in the food industry. Chipotle is committed to making its food more accessible to everyone while continuing to be a brand with a demonstrated purpose as it leads the way in digital, technology and sustainable business practices. For more information or to place an order online, visit WWW.CHIPOTLE.COM.

Nick DiGiovanni is a chef, food content creator, and world record holder for numerous food-related feats. After becoming the youngest-ever finalist on MasterChef Season 10, Nick rapidly gained a loyal, eager-to-learn audience for his award-winning video content. He now cooks for nearly 20 million followers across social media platforms, and he's been involved with The Farmlink Project since his brother helped found the company in 2020. Next up, Nick is working on his first cookbook, "Knife Drop," which will be released in summer 2023.